Our scripts have all been performed, some multiple times, and have all been received with tremendous critical acclaim.  Available scripts are listed below along with royalty information.  We strive to make our royalties affordable to all theater levels and are generally less expensive than many of the larger publishers.

Please feel free to contact us at no obligation concerning any of the titles you see on this page.  Perusal scripts are available for most all titles 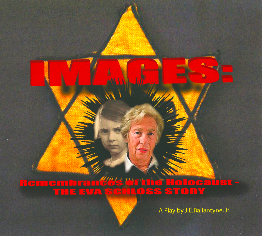 Drama in two-acts with multi-media

Synopsis:  The story of Eva Schloss, Anne Frank's childhood friend and posthumous step-sister.  A tour-de-force performance opportunity for the actress portraying Eva Schloss.  The story is told in retrospect, with video segments, as Eva, in her 80s, enters the attic of her home for an interview with a newspaper reporter.  The attic is adorned with items evoking past memories, both good and bad, in her life.  With the help of an unseen (pre-recorded) reporter, Eva takes the audience through her life in Vienna, Austria to when her family was captured by the Nazis after fleeing to Amsterdam.  Her harrowing time after the capture is highlighted by her transport and eventual imprisonment in Auschwitz.

Against all odds both she and her mother survive this terrible ordeal only to find out that her father and brother perished after the death march to Mauthausen.  By reconnecting to Anne's father, Otto Frank, Eva finds a new life that relieves her from the hate she felt from what was done to her family.  She talks about staying silent about her ordeal for 40 years before finally talking about it and finding an audience that deeply cares about her message.  She explains that she has found great comfort and satisfaction by speaking to adults and particularly children about her experiences and how those experiences have influenced so many people over the past decades.  A truly educational experience for all who see this play.  It contains a very uplifting message for audiences to carry away with them.

"...Gripping---captures the hope that the real Eva always has made a priority in her messages."  ------ TheVindicator

"A stirring performance --- embodies the inspirational Schloss with humility and heartfelt honesty."  ------  TheVindicator

"...a lesson to the audience beyond the Holocaust...this can be a great asset in delivering Holocaust histories to a wide range of audiences."

"...an important addition to the Holocaust works." 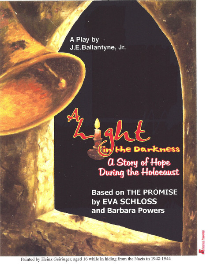 A Light in the Darkness: A Story of Hope During the Holocaust  - FREE PERUSAL SCRIPT

Drama in two-acts with multi-media

Synopsis:  The true story of Eva Schloss, childhood friend and step-sister of Anne Frank, as she and her family are forced into hiding during Hitler's rampage across Europe.  Their startling capture and time spent in Auschwitz are told in gripping detail through their return home at the end of the war.  Eva provides recorded narration herself.  A true story of hope and survival based on Eva's book, The Promise.

"To see 'A Light in the Darkness' is not to see a theatrical production, rather it is to see and feel history." ---- TheVindicator

" 'A Light in the Darkness' will give you perspective into your own life, and offer incredible amounts of hope to be remembered in trying times." ---- TheVindicator 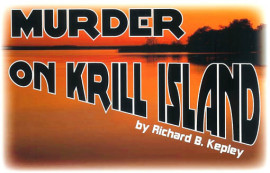 by Richard B. Kepley

Synopsis:  In true Agatha Christie style, Dexter Krill is murdered on a secluded island in New England.  Eight strangers are summoned to his estate on a cold snowy weekend to hear the reading of the will.  Is one of them the murderer?  Could be since after they arrive people start dying.  Reminiscent of the classic Ten Little Indians.

Synopsis:  Poe tells the life story of American horror writer Edgar Allan Poe.  Scenes from specific points and moments in his life combined with dramatic presentations of some of his most well known stories which is capped off at the end with a full cast staged reading of The Raven.  Perfect Halloween entertainment. 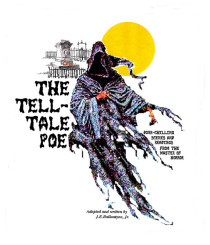 Set:  Minimal and can be done with set pieces

Synopsis:  A collection of some of Edgar Allan Poe's most gruesome and most famous stories and poems. Beginning with a visitation from The Dark Phantom (the Poe Toaster based upon the real life strange and hooded figure that visited Poe's Baltimore grave for years), the play takes the audience on a whirlwind tour of the literature of the Master of Horror, Edgar Allan Poe.  Tied together with scenes about his life, The Tell-Tale Poe is a great evening of theatre from both an entertainment and educational background.  The stories and poems are performed in a "readers theatre" style backed by dark and eerie lighting and sound effects.  The entire evening climaxes with a full company reading of The Raven.

WINNER OF A MARQUEE AWARD FOR BEST SOUND DESIGN 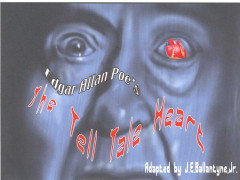 Synopsis:  Perhaps Poe's most famous story about an old man who is cared for by a caretaker that is obsessed by the old man's strange eye.  Even though he loves the old man, the eye drives him mad to the point that he must kill him to rid himself of the eye's perceived "evil."  Told in a backstory type of format the suspense builds to a breathtaking finale.  An old character-type cleaning woman is added for some welcome comic relief. 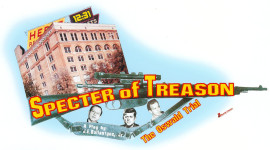 Synopsis:  For many years the JFK assassination has fascinated and intriqued people all over the world.  Lee Harvey Oswald's untimely death at the hands of Jack Ruby, guaranteed that no trial would ever take place in this case.  But now, Specter of Treason - The Oswald Trial, presents a dramatic and powerful case for what might have happened during the trial of the century.  A wealth of information about one of the most controversial crimes of our time.  A powerhouse of information leading to the jury's decision ---- the audience's decision (since they act as the jury).  Was Oswald guilty or innocent of killing JFK?  An excellent educational tool for schools and teachers.

" 'Specter of Treason' is an outstanding original theatrical presentation that captures the emotionalism and drama of the immediate post-JFK assassination period."   ------- Cyril H. Wecht, M.D., J.D. 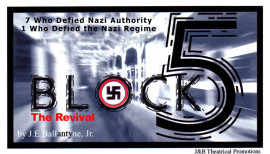 Synopsis:  A gripping drama about seven Jewish prisoners in Mauthausen during World War II.  Mauthausen was one of the most notorious Nazi concentration camps in existence.  Block 5 is based on actual events which took place at the camp.  The seven are the only inhabitants of Block #5.  Soon a captured British Naval officer is thrown in with them.  Is he really who he says he is?  And why are the seven in this block by themselves?  What plays out is high drama to the fullest.  As the Nazis

threaten and even torture some of the seven, we find out who these seven prisoners are.  We also find out why a prisoner of war is placed in a block with the seven Jewish men.  Act I ends with a startling reality while Act II builds to a stunning conclusion.

"To see this play is to be transformed." ------ TheVindicator

"....one of the darkest, most emotional performances to grace a local stage in recent memory." ------ Tribune Chronicle 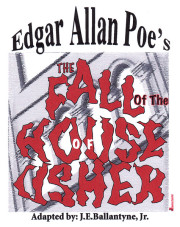 Edgar Allan Poe's: The Fall of the House of Usher  -  FREE PERUSAL SCRIPT

Synopsis:  One of Edgar Allan Poe's stangest tales, The Fall of the House of Usher, takes the audience on a strange journey to a very desolate location where all plant life ceases to exist and all human life is very tentative.  Living in a huge family mansion eaten away by centuries of time, Roderick Usher and his sister Madeline are visited by an old school friend, who hopes to convince them to leave the old homestead.  What ensues during his visit brings the true horror of the family's past into vivid view.  The house becomes a fifth character in this classically dark Poe tale.

".....a perfect way to immerse oneself in the gloomy atmospherics of Halloween...." 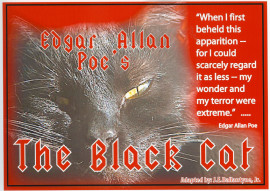 Synopsis:  Franklin and his wife Marguerite have recently inherited a house from Franklin's father.  A desolate place which also brings with it a strange servant named Reginald.  To brighten the house up Franklin brings a stray cat home to which both Franklin and Marguerite become very attached.  The cat, however, forms a violent dislike to Franklin and torments him endlessly.  Finally, in a drunken stupor one night, Franklin kills the cat and hangs it from a tree outside.  Sometime later a cat follows Franklin home one night.  Franklin, hoping to surprise his wife welcomes the cat only to find out that he looks exactly like the previous cat --- the one he killed.  Eventually the second cat torments him to maniacal heights which leads to Franklin killing his wife and walling her up in the cellar.  But the cat is not done with him yet.  A classic Poe story. 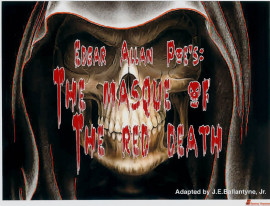 Edgar Allan Poe's: The Masque of the Red Death

Synopsis:  Prince Prospero rules the land with an iron hand.  No one is free from his tyranny and no one is free from the menacing shadow of his castle.  But a new fear has gripped the region.  A horrifying and agonizing death has invaded the countryside killing people by the hundreds.  Death comes rapidly with very little warning.

In an attempt to save his most loyal subjects from this horrifying malady, Prince Prospero invites one-thousand of his most loyal follwers to his secondary castle, a sprawling ediface, capable of sustaining life for an endless period.  By welding the doors shut, the prince will be able to save all from this painful death.  To entertain his guests, the Prince decides to throw an elaborate masquerade ball requiring all to wear colorful costumes and grotesque masks.  The height of the ball will offer a tour of the castle including the seven forbidden rooms on the seventh level of the castle.  Once the toru begins, no one can turn back --- not even as things begin to occur which raise doubts about two mysterious guests who seem to appear and vanish at will.  Only once they reach the final room --- The Black Room --- do we find out what stalks the castle. 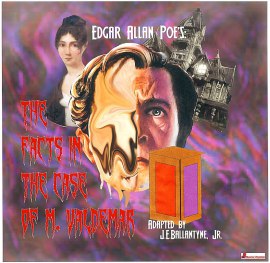 Synopsis:  M. Ernest Valdemar and Dr. Pontier have been friends for years.  But this most recent visit by Pontier is not out of friendship.  Valdemar is terminally ill and Pontier visits him in the hopes of convincing him to take part in a relatively new use for mesmerism.  Pontier explains that this new use for mesmerism could postpone death and leave the afflicted patient in a suspended state between life and death --- thus opening up the possibility of finding cures, applying them and then lifting the mesmeric trance from the patient so that he may enjoy a normal life.

It all sounds very promising until the experiment is tried and the element of the unknown rears its ugly head.  To add even more angst to the procedure, Valdemar's past returns to visit him thereby complicating the process and adding a dangerous new element which Pontier is unprepared to handle.  Classic Edgar Allan Poe!!

"A classy take on Poe chiller."

"Ballantyne shows a deep respect for the great works of Poe and his impeccable use of foreshadowing and subtlety make for a truly entertaining evening."

Where to Find Us:

We are centrally located in Boardman, Ohio, close to downtown Youngstown and mid-way between Pittsburgh and Cleveland.